Gaile and Josh, mother and son, walk hand-in-hand down a hallway at The Ohio State University Wexner Medical Center. 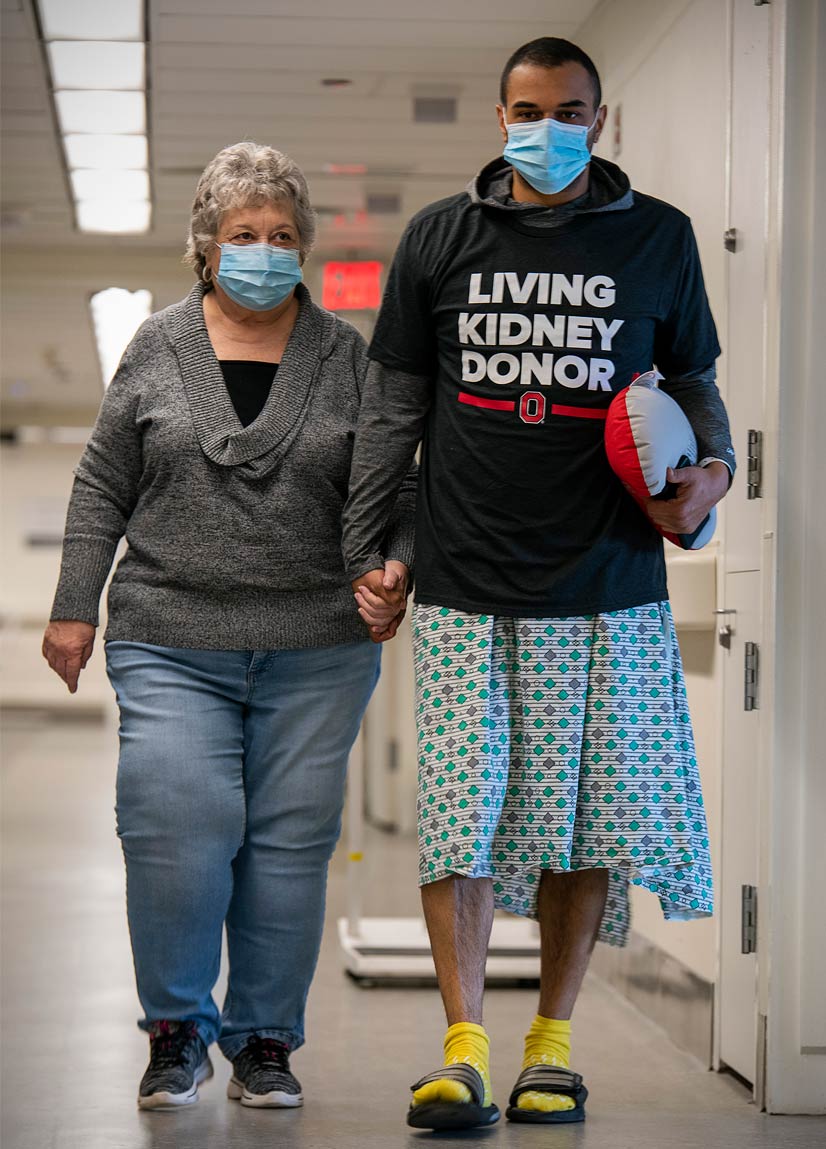 The fact that they’re both living organ donors is remarkable in itself. But the plot twists of their incredible tale seem to have jumped off a Hollywood script.

They’ve each donated a kidney to the same man — 69-year-old Jonathan Schriber, who is Gaile Schriber’s husband and Josh Schriber’s dad.

Gaile donated her left kidney to Jonathan 21 years ago. This year, after Jonathan began feeling ill, it was determined that he would need another transplant.

So Josh stepped up, despite his dad’s initial misgivings, and donated his left kidney to Jonathan.

It’s a testament of true love between the two.

“Just before surgery, I said to Josh, ‘I don’t know what to say other than I owe you everything,’” Jonathan says. 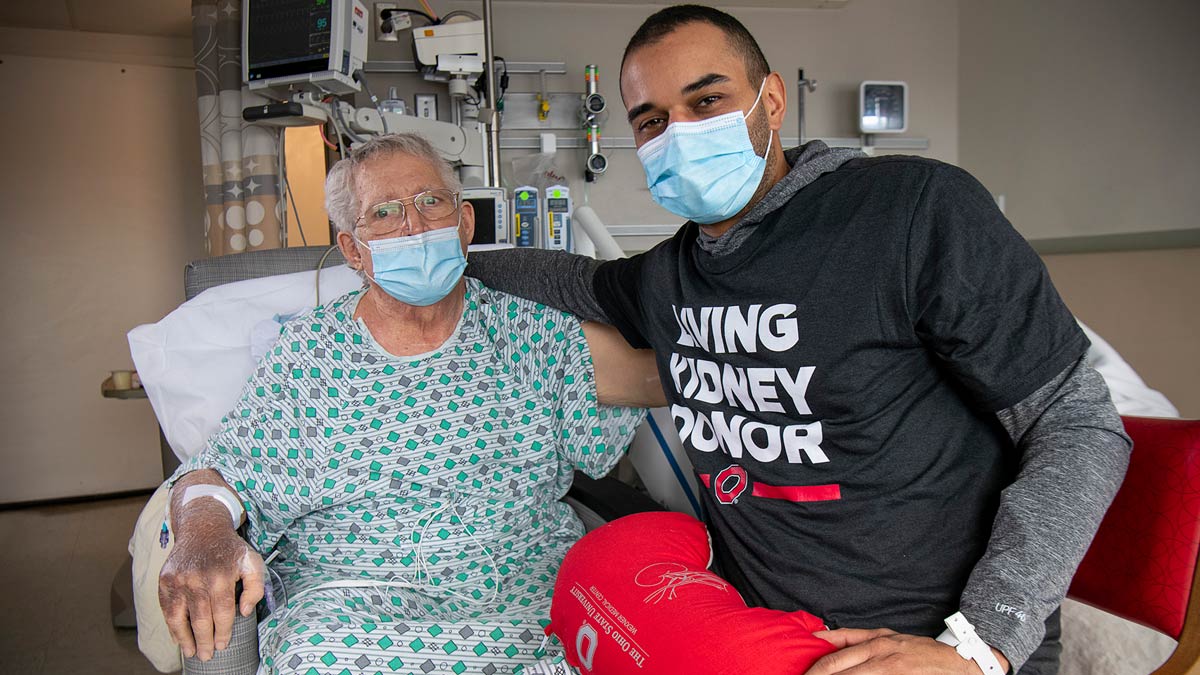 “You’ve given me more years. The sacrifice that you’re making, I saw it with your mom. I see it with you. It’s a huge sacrifice,” Jonathan says.

“Anybody who’s willing to put their life on the line for someone else — it’s the greatest gift anybody can give. I will always be indebted to you,” Jonathan says.

The story’s wonders don’t stop there. The Ohio State University Wexner Medical Center transplant surgeon, Amer Rajab, MD, PhD, performed both surgeries, decades apart, using what was in 1999 the pioneering process of laparoscopy, which he introduced to Ohio State.

“I looked at the chart and sure enough, I did her surgery in August 2000,” Dr. Rajab says.

It's a fitting time to share the Schriber family's unique story and learn about the magic of kidney donation. April is National Donate Life Month, which encourages Americans to register as organ, eye and tissue donors, and to honor those who’ve saved lives through the gift of donation.

According to the United Network for Organ Sharing (UNOS), more than 90,000 people are waiting for a lifesaving kidney transplant in the United States. Of all organs on the national transplant wait list, the kidney is needed more than any other. The average wait time for a kidney is four years, but the wait can change depending on the situation and availability of a living donor.

As they sit together in a room a couple of days after Jonathan’s second transplant, Gaile tries not to make Jonathan and Josh laugh, remembering that laughing made her side hurt when she had her kidney surgically removed, known as a laparoscopic nephrectomy. Dr. Rajab estimates that Gaile was one of the first ever living donors for the procedure at Ohio State. Since then, more than 3,000 laparoscopies, less invasive than the open technique, have been completed at Ohio State’s Transplant Center.

Gaile says her health has been good since then and her life hasn’t changed since giving a kidney.

“I was going to be the donor whether he liked it or not,” Gaile says. “We had four children. How could I deny my children their dad? And he’s a nice guy. I’d like to keep him around for a while.”

“She was insistent that she was going to be the donor,” Jonathan says. “I said, ‘there are no biological ties here, the odds are outta this world.’ We went through everything, and she was a match.”

Jonathan and Gaile Schriber have been married for more than 45 years. The couple has two biological children and two adopted children, one of whom is Josh, who was adopted when he was 1 year old.

“I was adopted myself,” Jonathan says. “I always wanted to adopt.”

“When the time was right, we got Josh into our home and family,” Jonathan says. “And then a year and a half later, his sister Molly came. We melded together.”

Before retiring three years ago, Jonathan was a pastor for 35 years at St. John’s Lutheran Church in Sidney, Ohio. Gaile taught Sunday school and was an alcohol and drug counselor. For enjoyment, she makes quilts. She plans to make one for Dr. Rajab.

The transplants have been life-changing experiences for Jonathan, who said he felt weak and tired before the procedures. “And, right after transplant, you start to get all of that back. It’s night and day,” he says.

On average, a kidney from a living donor lasts about 15 to 20 years. Some will last longer; others might last less. Ohio State currently has patients living more than 40 years with kidneys from living donors.

“I waited 24 years to get under Jon’s skin, and I made it,” Gaile jokes, forgetting momentarily not to make him laugh. She quickly becomes serious.

“I’m going to be really honest with you,” Gaile says. “I got more out of donating a kidney than Jon did. My faith became stronger. I looked at the world differently. I would encourage anybody to think about it. To really pray and consider it because the rewards are great. I’ve got my family. You can’t ask for anything more.”

But that’s not the end of the story. A little over a year ago, Jonathan says his numbers were starting to go down again, and he started feeling bad. He made an initial education appointment at Ohio State in December 2020, and that started the transplant process.

“I was just going to be put on the donor list,” he says. “But that kind of changed.”

In February 2021, during a discussion over crab and steaks with his brother, niece and sister-in-law, Josh learned that his dad needed another new kidney.

“I remember at that time feeling helpless. I wanted to help back then,” he says. “Mom went through it and was still getting me ready for school, packing my lunches. I saw both of my parents come out of it so strong and so well.”

Josh didn’t hesitate. He got his blood tested to see if he could be a match for his dad. His was A+. He asked his dad what blood type he was.

“That was the first step where I started to think, ‘Wow!’ This could work out,” Josh says.

Jonathan was adamant that he didn’t want any of his children to offer him a kidney. But Josh was just as determined to be a living donor.

“I started the slow roll of getting this going without him knowing,” Josh says. “I got far enough in the process to where it became so real it got hard for him to deny me at that point. It got exciting from then on.”

Josh’s drive came from one place: the heart.

“I think it takes an incredible person to adopt two children,” Josh says. “It doesn’t make your life easier financially. There are so many sacrifices you must make. This is the culture that I was brought up in, so for me, it was a no-brainer. I’m at least going to try.”

Mom was proud of her son.

“I was so happy,” Gaile says. “I knew he was in good hands and would be well taken care of. And I was excited to see the doctor again.” 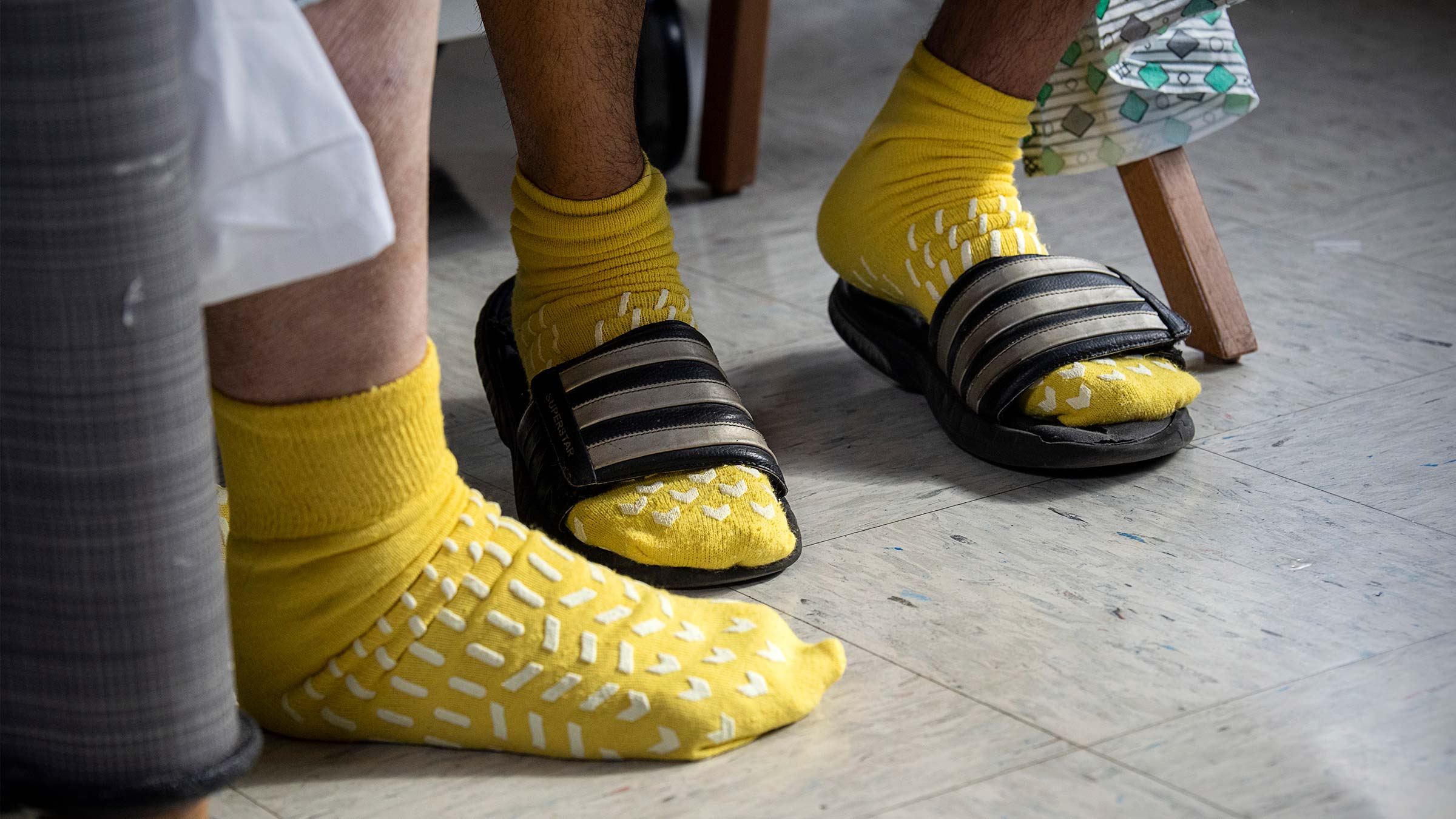 Dr. Rajab removed Josh’s left kidney on Jan. 25, 2022. The left kidney offered the easiest transition into his dad’s body, as it’s typically the smaller one (in living donor transplants, the “best” kidney always remains with the donor). After removal, Dr. Rajab handed off the donor kidney to the transplant center director, Kenneth Washburn, MD, who carried it into the adjacent operating room to prepare it for transplantation.

“The kidney is our body’s washing machine,” Dr. Rajab says. “That’s what they do all the time. Our body has significant reserve, so people can live with just one kidney. The remaining kidney enlarges to compensate for the missing kidney. The donor and recipient should have a normal life with one kidney if they live a healthy life.”

Dr. Rajab was thrilled to see Josh up and walking after the procedure. “As a transplant surgeon, nothing is more rewarding than seeing my patient doing well after surgery.”

Josh wants to get back to life after a six-week break and show others how simple it is. He helps run a business called Cincinnati Goodfellows in Anderson Town Center in Cincinnati, and he says there are many people who’ve made sacrifices for him while he’s recovering.

“Not only did I want to do it, but I wanted to show other people that they could do it, too,” he says. “I don’t want others in this scenario to be afraid.” 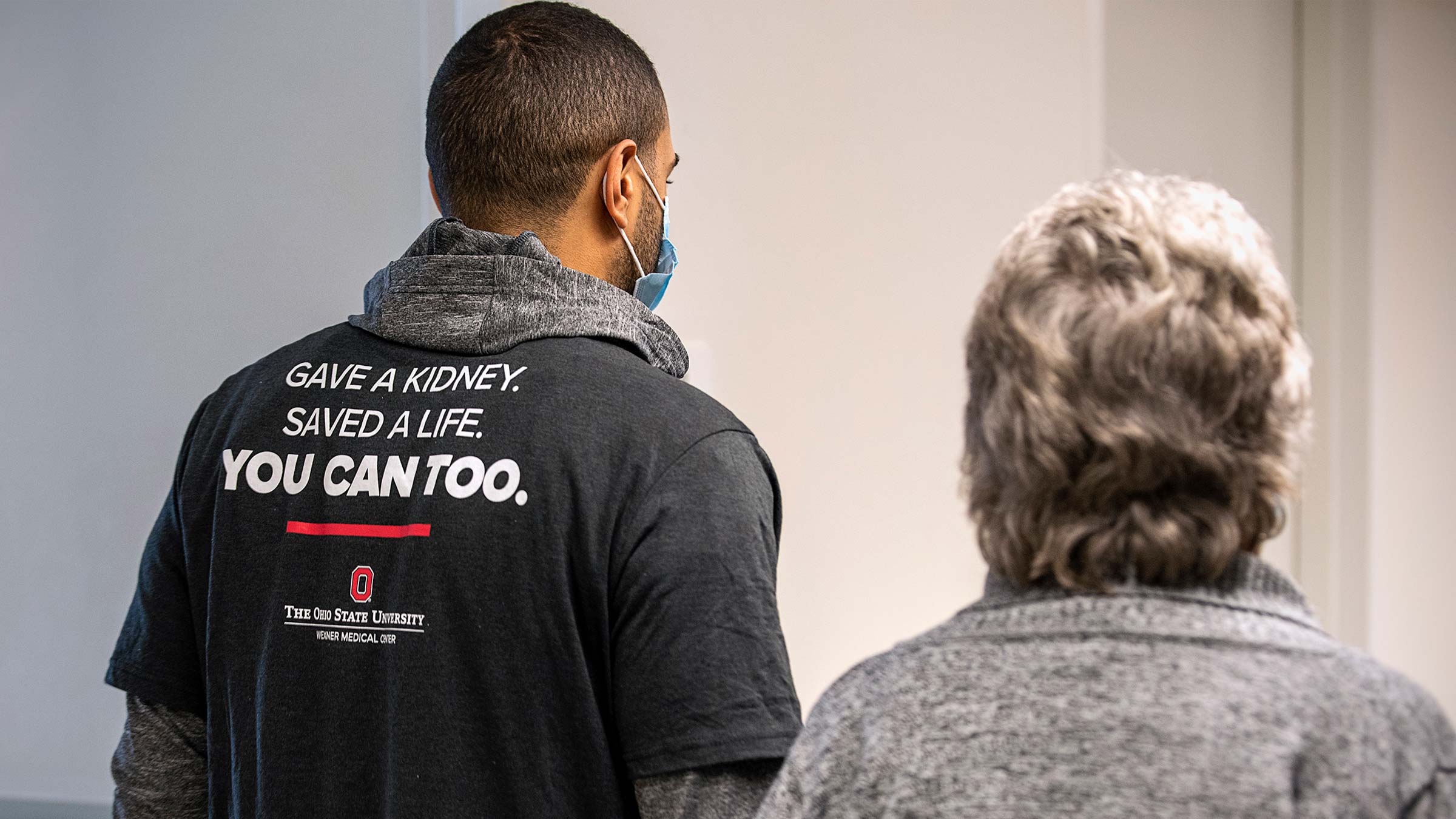 “I want to play basketball. I want to eat and hang out with my friends. I want to do all the things that I was able to do before. But for me, the reward’s already there. My dad is alive and well. That’s gold.”

“I’ve been blessed with my life,” Josh continues. “Dad had been a pastor in our hometown for so many years. There are people who I went to high school with who were struggling, and he’d help them and their families. He’s a great man. For every year that we can keep this man on Earth, it’s a better place. My parents are great role models.”

A kidney from a living donor usually functions immediately, because the kidney is out of the body for a very short time. Some deceased donor kidneys do not function immediately because they are stored on ice and can become “sleepy,” and as a result, the patient may require dialysis until the kidney starts to function again.

That’s another benefit from Josh’s gift to his dad.

“By the grace of God, we’ve been blessed so much,” Jonathan says. “I’m the one who struggles. Why should I be so fortunate to not only have it once but have it twice? That compels me to take care of myself and take care of this gift that has been given to me.”

There are positive changes that happen after donating, too, Josh says.

“You need to make healthier choices to take care of your body and keep you in check. You need to eat better. You need to quit smoking if you smoke. I’ve given away my kidney, but I think my life expectancy just went way up.”

After the loving gesture, Jonathan has only one more request of his son:

“Next time you have surf-n-turf,” Jonathan says, smiling, “I better be included.”

The best option for a patient waiting for a kidney transplant is to receive one from a living donor.

For some patients needing a liver transplant, receiving a portion of a liver from a living donor is an ideal option.