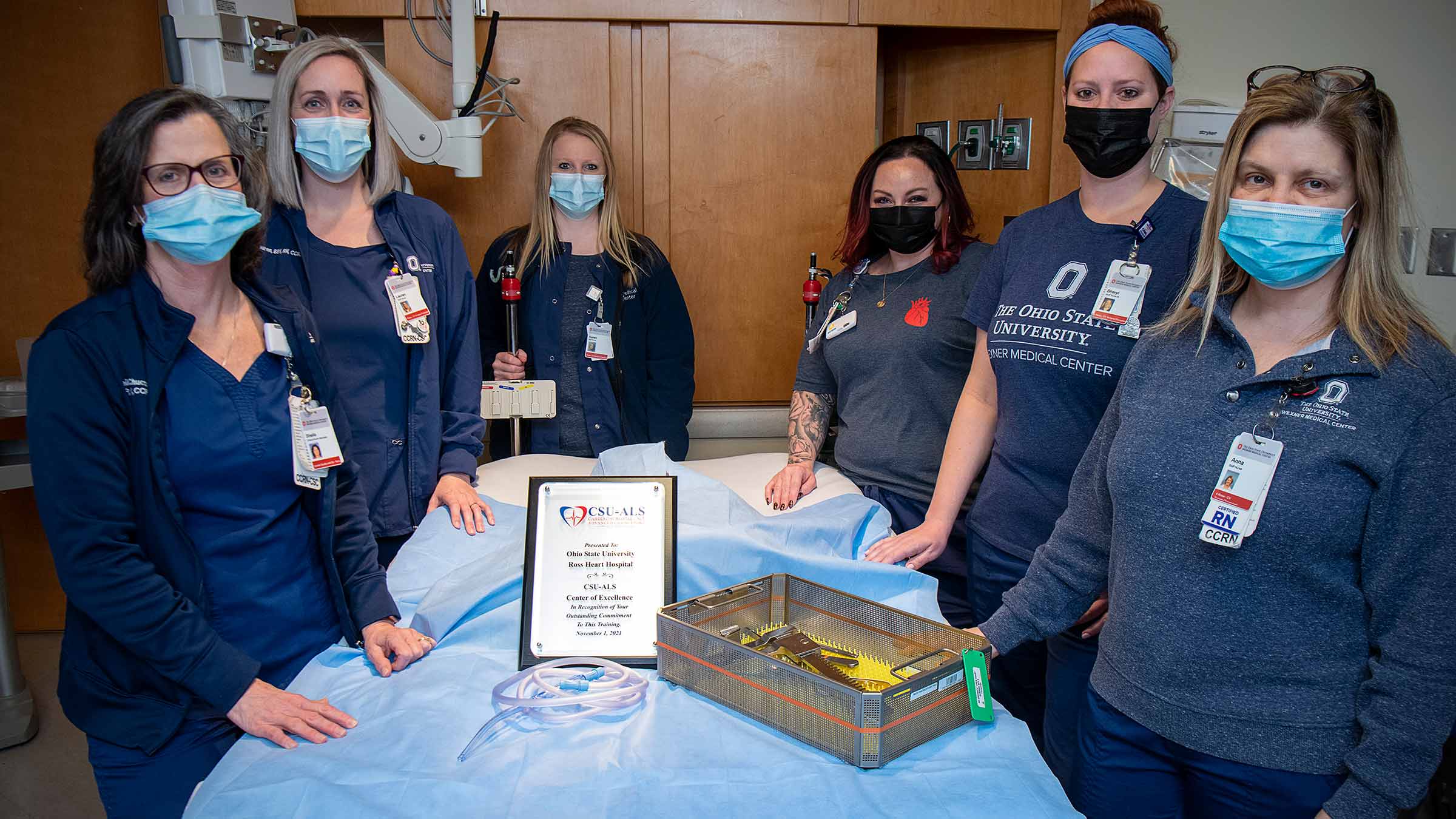 Those who care for hearts know how unpredictable they can be. They can slow to a dangerous rhythm. They can stop.

And both situations can turn fatal depending on how healthy the heart and how skilled the medical team.

In the crucial few minutes after a heart stops or slows to a perilous pace, staff at the Richard M. Ross Heart Hospital at The Ohio State University Wexner Medical Center are trained in a method that’s bringing more patients back from that precarious state.

The technique is specifically for patients who are within the first 10 days after open heart surgery. It’s within this critical window when the body’s recovery response to the trauma of surgery — most commonly swelling within the chest cavity — can stress the heart and lead to more serious complications.

When the heart stops beating in patients recovering from open heart surgery, chest compressions could do more harm than good. But pushing on the very spot that was opened days or hours earlier may be the only alternative unless the staff has unique training like those at the Ohio State Ross Heart Hospital.

Through special Cardiac Surgical Unit Advanced Life Support training, staff in various roles — nurses, nurse practitioners, respiratory therapists and pharmacists — are all prepared to take part in trying to regain a normal heartbeat. The technique could include reopening a patient’s chest, if necessary, to assist a surgeon in resolving a problem such as bleeding around the heart or a failed pacemaker.

“The idea is to get the chest back open very quickly, look for the bleeding and relieve that pressure in the chest.” Lisa Post, nurse manager of the Cardiovascular Intensive Care Unit of the Ross Heart Hospital.

A race against time 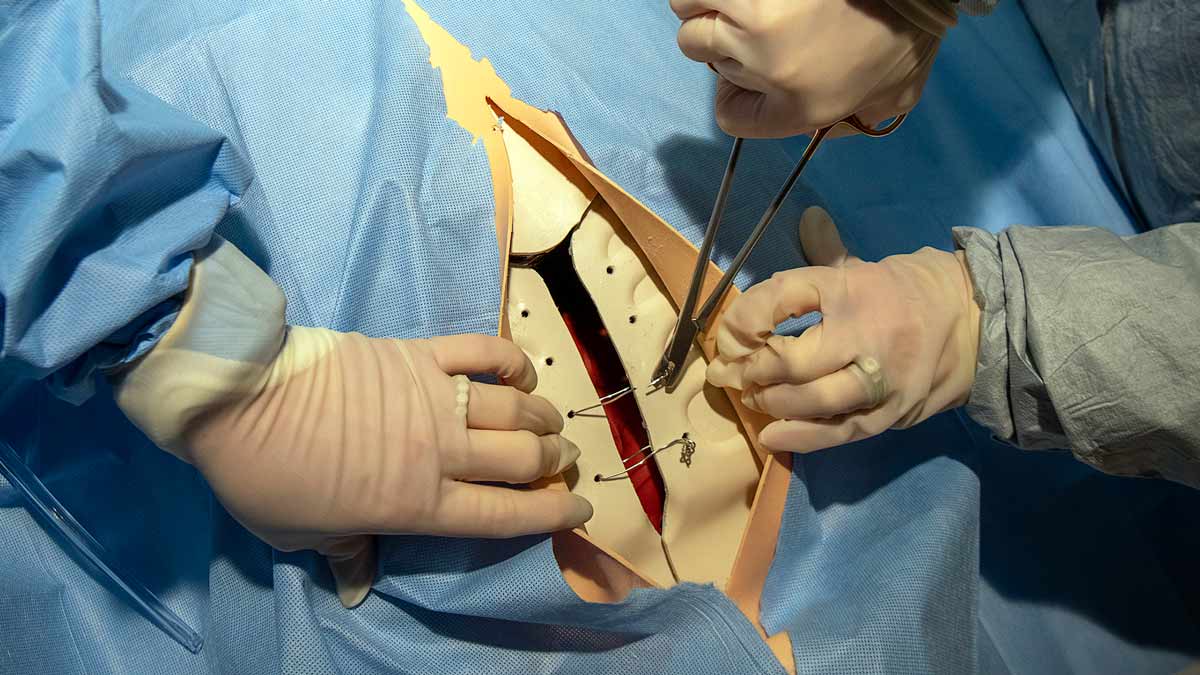 Each minute is crucial in the race to restart a heart, so staff are trained to enter the chest cavity within five minutes of a heart stopping. After that narrow window of time, a patient risks suffering complications such as brain damage or death.

At the bedside of every open heart surgery patient, a set of surgical equipment is assembled. With those tools, staff are trained to reopen the surgical incision and undo the wires binding a cardiac patient’s sternum, the bone in the middle of the chest. Then, a surgeon can quickly reach the failing heart.

“If you or your family members were to have heart surgery, you would want them to be in a facility where the staff is trained for these unforeseen situations,” Post says. “Having people be prepared, knowing a method to fall back to, just alleviates some of the chaos.”

The victory of saving a life

Last fall, when a patient’s blood pressure plunged suddenly, Sheryl Everett, a nurse at the Ross Heart Hospital, used the resuscitation technique to help save the woman’s life. Just hours after coming out of open heart surgery, the patient had developed an infection.

Everett was down the hall when she was called into the room. Working alongside a surgeon, she helped suction out the fluid that had pooled around the woman’s heart and establish a normal heartbeat. “I didn’t have to think twice,” says Everett, an ICU nurse for 12 years. “I knew what supplies were needed, what steps had to be done. I just did it.”

And the patient’s heartbeat returned to a normal pace. After fully recovering, she left the hospital.

During a pandemic when Everett and her team members have held the hands of many patients in their final moments, every victory of saving a patient’s life is particularly savored. “It was an intense adrenalin rush and scary but awesome all at the same time,” Everett says.

Spreading the know-how across the hospital

For its efforts, the Ross Heart Hospital recently received a Center of Excellence award, having trained more than 90% of the staff who care for open-heart surgery patients in Cardiac Surgical Unit Advanced Life Support. The award was given by Cardiac Surgical Advanced Life Support North America, a nonprofit organization based in Kentucky that offers training on the special resuscitation protocol.

That training is ongoing, with the goal of having even more staff able to use the technique.

“With the new protocol, we’re already a couple of steps ahead of the game,” says Jesse Lester, MD, an intensive care physician at the Ross Heart Hospital.

If the patient’s heart needs to be operated on again to stop a source of bleeding, staff has already done some of the preparation, so a surgeon can get to the heart quicker and ideally resolve the problem.

“The entire goal is to get those patients back faster than we would have otherwise,” Lester says. “And we’re doing that.”