Dexter is the type of friend who’ll look you right in the eye when he greets you, always ready to lend a hand if you need it.

The 10-year-old basset hound mix was one of the featured therapy dogs greeting hospital employees at “Cuddle a Canine,” held at the Ohio State Richard M. Ross Heart Hospital in late February. Dexter (@therealdextergram) is named after a fictional serial killer in the popular TV series “Dexter.” But the only killer instinct the duck-footed pup has is killing with kindness.

“People can’t help but smile and be excited when they see him,” says his owner, Hannah Entwistle, a nurse at the Ohio State Ross Heart Hospital. “Dexter has a way of staring into your soul. He’s also an expert snuggler.”

Dexter is one of 20 therapy dogs in the Buckeye Paws program, which launched at The Ohio State University Wexner Medical Center in March 2020. Dogs in the program sniff out stress among hospital employees and offer relief with their soft fur and sympathetic eyes.

The program arrived at the perfect time, relieving the emerging stress of frontline workers as the world shifted dramatically in 2020.

“We were right on the verge of the pandemic,” says Aimee Mitchell, Buckeye Paws program manager. “A week later, we found out about COVID-19, and we immediately shut the program down. We didn’t know if it was safe for staff or how COVID-19 was transmitted.”

Mitchell and her team met with representatives of Ohio State’s Division of Epidemiology in the College of Public Health as well as with Rustin Moore, dean of the College of Veterinary Medicine. Once they confirmed that dogs weren’t carriers of COVID-19, they knew exactly how they would fit in.

“When we go out now, people will say they wouldn’t have been able to make it through this pandemic without these wonderful dogs,” Mitchell says.

The success of Buckeye Paws is expanding beyond the Ohio State Wexner Medical Center campus to The Ohio State University. Ten more dogs — with another 20 to come — are being trained to provide university faculty, staff and homesick students the same supportive experience as the medical staff. The new program is set to launch this month.

Entwistle works in the cardiovascular intensive care unit, caring for heart and lung transplant patients and patients critically ill with COVID-19 who are placed on ECMO, an advanced form of life support. Her unit is a symbol of the high-stress, high-pressure environment health care workers faced in the pandemic. And then one day the Buckeye Paws dogs visited her unit.

“Dexter already was my support animal for a number of years. When I saw the other dogs, I knew Dexter would be a perfect fit for the program. He’s very calm and well-behaved,” Entwistle says.

The idea for the program came from a group of employees at the Ohio State Wexner Medical Center, including Beth Steinberg, associate chief nursing officer for Critical Care, Emergency Services and Clinical Resources, and Mary Justice, associate executive director of Patient Care Services and Clinical Transformation. As Steinberg and Justice were taking their dogs, Brienne and Shiloh, to therapy class, they talked about creating a dog-greeting program for staff.

First, they tested out their idea by going to intensive care units and the emergency department at the Ohio State Wexner Medical Center. They met Mitchell, who had been making inquiries about bringing the program to Ohio State. The three found they had a shared passion for animal intervention, and the program blossomed.

“There’s a lot of evidence to show that interacting with an animal, usually a soft, cuddly dog, helps to decrease blood pressure, stress and anxiety, and also improves mood. We also know anecdotally it’s a sense of connection and really improves collaboration and communication,” says Steinberg.

“Research shows that the health — whether physical, social, behavioral, emotional, mental or psychological — of people is improved by interacting with pets. There are biological reasons for these effects, including decreases in the stress hormone cortisol and increases in the feel-good hormone oxytocin among others, which help explains the positive impact of the Buckeye Paws dogs on members of the health care team,” says Rustin Moore, DVM, PhD, dean of the College of Veterinary Medicine.

Many of the dogs now have sizeable Instagram followings. Their popularity was evident when more than 500 staff attended the Cuddle a Canine event, a feel-good moment that melted away stress.

As Wozniak makes her way around the room, she sees one of the furry celebrities. “Oh, my goodness, I’ve never met Crocket (@crockettsuperstar) in real life before. I’ve only seen him on Instagram.”

Perhaps the most famous pup is Shiloh (@sirshilohthegolden), with about 5 million likes. Shiloh is a 4-year-old English cream golden retriever.

“Shiloh went viral,” Justice says. “One of our physicians posted a photo of him on Twitter. This meme of him has bounced all over the world. There have been articles about him in India, Italy, France, China. It’s just hilarious. He pops up everywhere.”

The dogs visit a few units a week. Staff members take breaks and sit on the floor with the dogs. They rub their bellies and talk to them in high-pitched voices.

“Something like this can make your day,” says Ryan Beattie, a nurse anesthetist who’s worked at the Ohio State Wexner Medical Center for five years.

Priya Varma, a hospitalist in the Department of Internal Medicine, agrees.

“Whenever I see them on the floor, my heart just explodes. They calm me down and put a huge smile on my face. I always take 10 minutes off from whatever I’m doing to see the dogs.”

By the end of Cuddle a Canine, you can see the dogs are tired. Justice says the continual interaction is a lot for them to absorb.

“It wears them out because they’re feeling your feelings,” she says. “Dogs have a different way of working in the human world. They’re always sensing what we’re doing, and they’re trying to interpret our interactions. They’re givers, and they need to please.

“When you’re constantly giving that out and taking it back, it wears you out. It can wear them out.”

Dogs typically start with a temperament test. It allows the trainer to establish a baseline for further instruction. That’s followed by basic obedience tests, specific therapy-dog training and advanced instruction that introduces the dogs to the medical environment.

After performing three rounds of observation in the field, the trainers certify the dogs for the program.

“It’s a pretty intense process that takes about 12 to 16 weeks,” Justice says.

Until the coordinators were able to train and add more dogs, the four original dogs carried the program. In addition to Brienne and Shiloh, there’s Radar, a 6-year-old Labrador retriever who belongs to ReNea Owens, associate director of Rehabilitation Services, and Ellie, a 7-year-old German shepherd, who was a gift from Guide Dogs of America to handler Emily Lewis to aid in her recovery after being diagnosed with breast cancer in 2013.

Brienne, Shiloh, Ellie and Radar are being commemorated with stuffed animals created in their likeness that bear their names and Buckeye Paws patches. The plushies are expected to be ready for purchase to employees in mid-April. Sales support Buckeye Paws and will go toward collars, harnesses, patches and quarterly training for new dogs who become part of the program. It’s up to the dog’s handler to pay for initial training.

Dexter, who was rescued as a puppy, is part of the second class of Buckeye Paws dogs. He first served as a personal emotional support animal for Entwistle. She took Dexter into the hospital to visit her fiancé Dan’s father after he had surgery.

“It was amazing how he lit upon seeing Dexter,” Entwistle said. 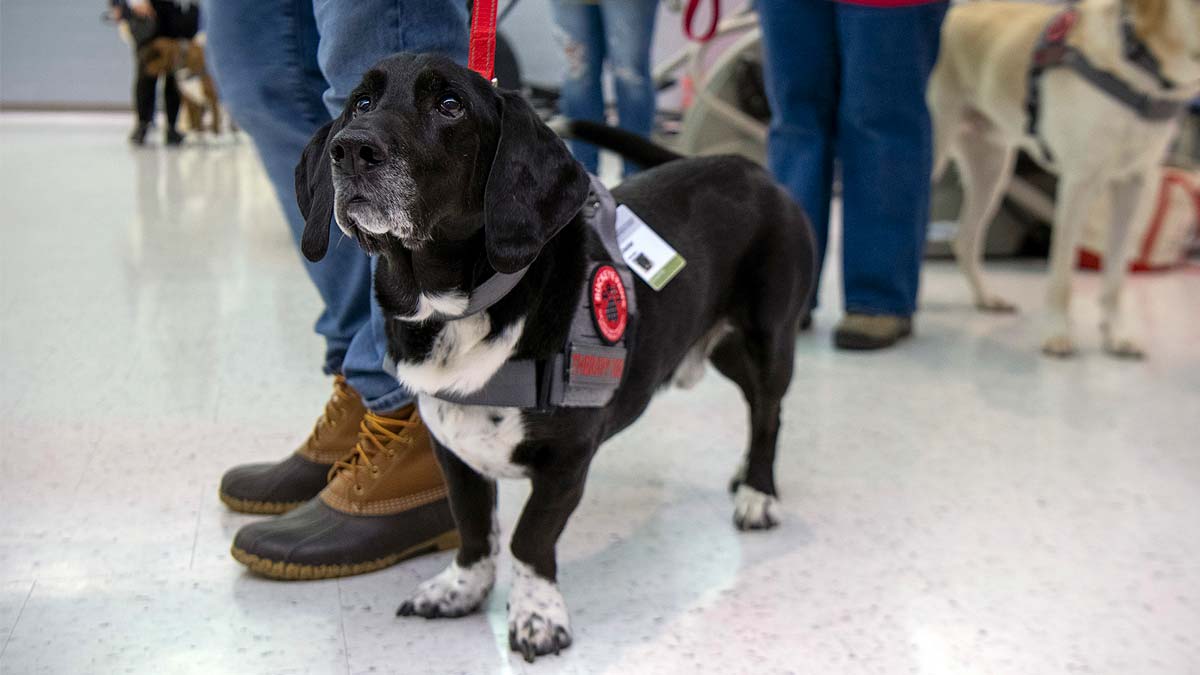 “Being a therapy dog is something Dexter should have been doing for a long time,” Entwistle said.

Your donation to Buckeye Paws supports the wellness of health care workers at The Ohio State University Wexner Medical Center by funding programming, training and supplies for the dogs of Buckeye Paws.

Give today
Wendy Pramik is a senior writer and staff photographer at The Ohio State University Wexner Medical Center Department of Marketing and Strategic Communications. 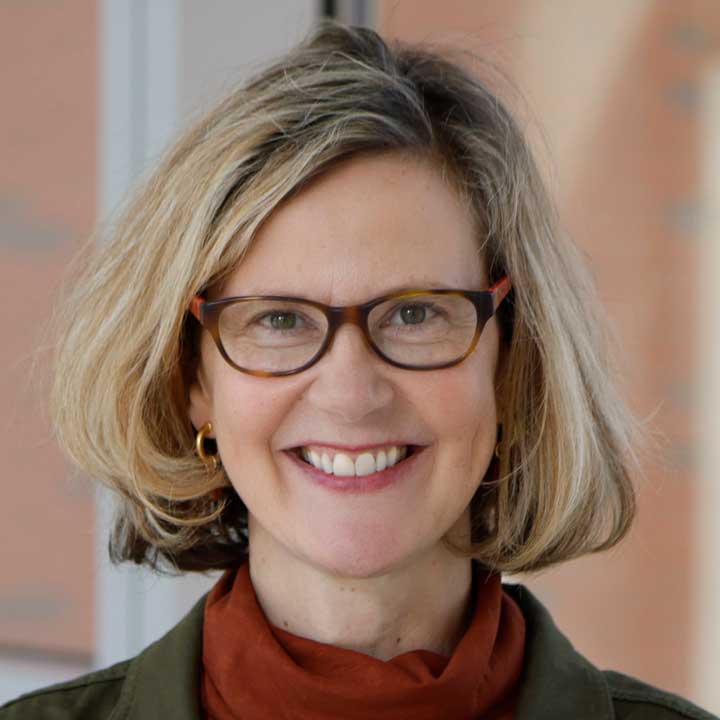