50 years at the front

Since a “war on cancer” was declared half a century ago with the signing of the National Cancer Act of 1971, scientists and clinicians the world over, including those at the OSUCCC – James, have made big gains against a formidable foe. But this war is far from over.

In 1971, the national cancer landscape was fearsome and foreboding.

Cancer in its many forms had become the second-leading cause of death in the United States.

According to the American Cancer Society, only one of two people diagnosed with cancer in this country could expect to live five years, compared with two of three people diagnosed today. Many considered a cancer diagnosis the equivalent of a death sentence.

The ASCO Post, a newspaper published in partnership with the American Society of Clinical Oncology, reports that the disease was so stigmatized in 1971 that people often wouldn’t say the word “cancer” aloud, and physicians were sometimes reluctant to discuss a cancer diagnosis with patients.

Although cancer research and clinical care had existed for decades, progress had been incremental and insufficient to offset the growing number of people with cancer and the overall dismal survival rates.

But a turnaround began on Dec. 23, 1971, when President Richard Nixon signed the National Cancer Act and called for a concentrated effort “toward conquering this dread disease”— an effort that became known as the “war on cancer.”

This unprecedented legislation authorized the National Cancer Institute (NCI) to develop a nationwide cancer program with the NCI and other research institutes, along with federal and nonfederal programs, and to support the massive effort with millions of dollars in new funding.

The New York Times quoted Nixon as saying he didn’t want to raise false hopes by simply signing an act, adding that “for those who have cancer, and who are looking for success in this field, they at least can have the assurance that everything that can be done by government (and) by voluntary agencies in this … country, now will be done, and that will give some hope, and we hope those hopes will not be disappointed.”

The act also provided for the establishment of NCI-designated cancer centers that meet rigorous standards for transdisciplinary, state-of-the-art research focused on developing better approaches to preventing, diagnosing and treating cancer.

In 1976, thanks to the combined initiative of more than 100 cancer researchers from seven of its colleges who were eager to join the national effort, The Ohio State University became the 18th NCI-designated Comprehensive Cancer Center and is today one of just 51 such institutions. There are also 13 NCI-designated Cancer Centers and seven Basic Science Cancer Centers.

Half a century after the signing of the act, cancer has not been conquered, but medical scientists past and present at Ohio State’s Comprehensive Cancer Center – James Cancer Hospital and Solove Research Institute (OSUCCC – James) believe huge strides have been made in the worldwide understanding of cancer that have led to far better treatments and chances for survival. 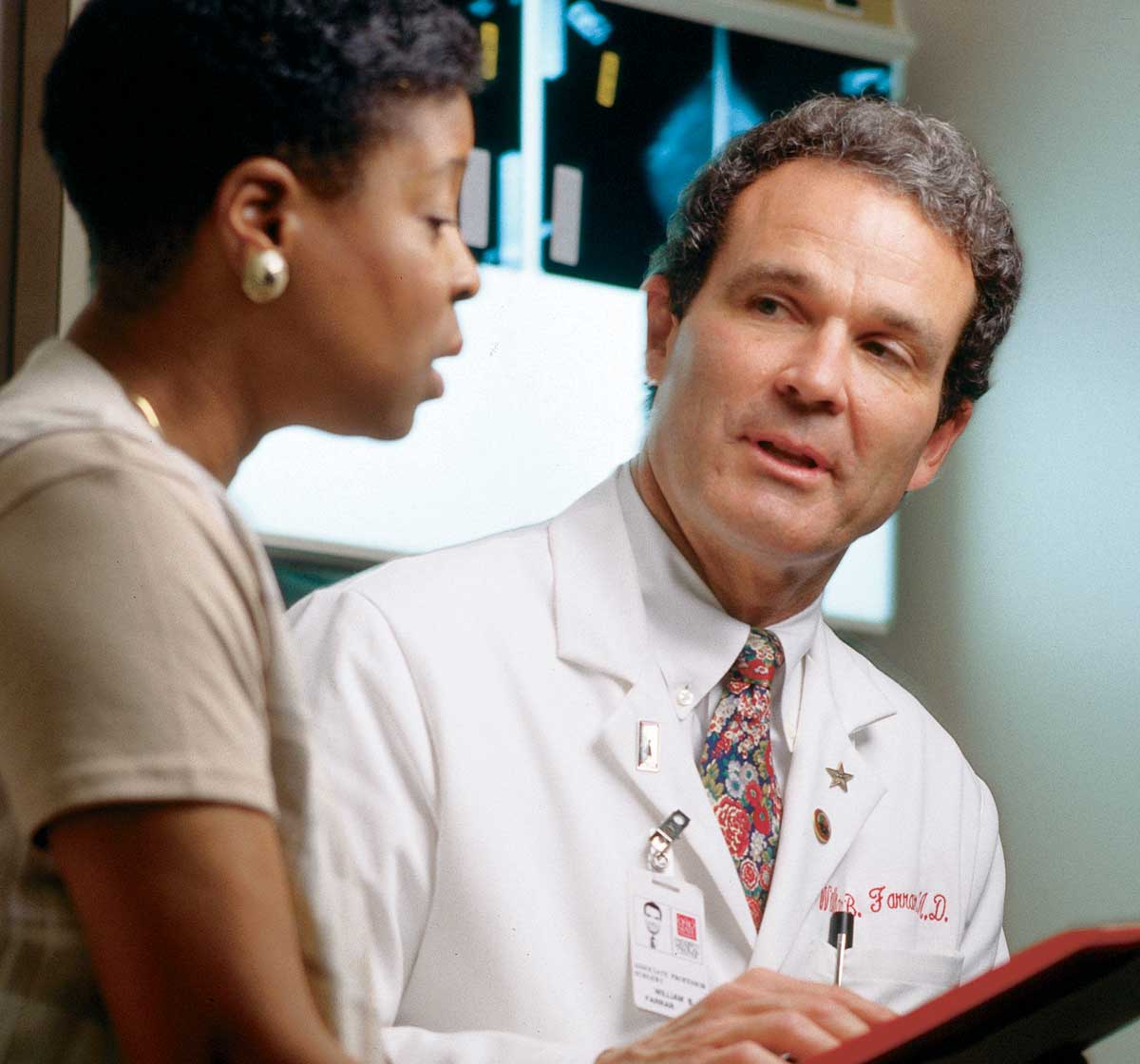 “I could never have imagined we’d be where we are today with preventing, treating and curing cancer.” James CEO William Farrar, MD, a surgical oncologist since the 1970s who specializes in treating breast cancer.

“Fifty years ago the treatment options were much more limited, and deaths from cancer were higher. The death rate from cancer in the United States has declined even more in the past 20 years — all because of research and a collective knowledge gain that have led to new ways of treating patients.”

Farrar says his 1970s training for the treatment of breast cancer included only one available option, a radical mastectomy. “I have vivid memories of performing those. But over the 45 years that I’ve been a surgeon, I’ve seen it evolve from radical mastectomy to, in some cases, minimal surgery combined with chemotherapy, endocrine therapy and/or radiation therapy. This less invasive option has the same cure rate as a radical mastectomy.”

As research continues and methods of preventing and treating cancer become even more sophisticated, hope abounds that cancer will one day be — if not eradicated — more often managed as a chronic and increasingly curable illness.

An early luminary within Ohio State’s cancer program was the late Arthur G. James, MD, who led the charge for building a cancer hospital at Ohio State for four decades and saw his work reach fruition when The James opened in 1990 in the heart of the medical center campus. James’ ultimate dream was the eradication of cancer, and he believed that all cancer would eventually be wiped out.

Some of his successors at the OSUCCC – James agree. Others aren’t as certain, but all are hopeful.

“As our understanding of the molecular biology underlying cancer progression improves, we can anticipate that many more forms of cancer will prove to be modifiable using increasingly less toxic approaches,” says OSUCCC Director Raphael E. Pollock, MD, PhD, FACS, a longtime surgical oncologist who specializes in sarcoma. 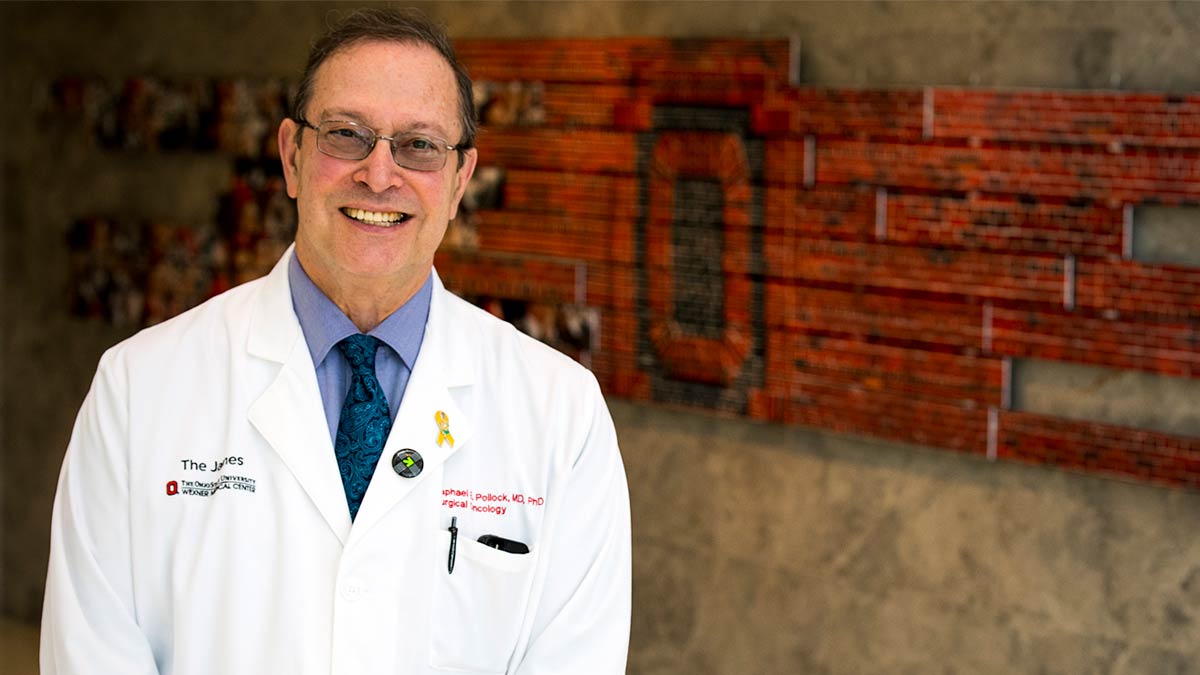 “Ultimately, I anticipate that the vast majority of cancers will be curable in most patients or at least controllable as chronic diseases, rather than the aggressive malignancies with unfortunately high likelihoods of lethal outcome that we still all too often see today.” Raphael E. Pollock, MD, PhD

In connection with the 50th anniversary of the December 1971 signing of the National Cancer Act, several cancer experts at Ohio State share their thoughts about the biggest global advances in cancer research and treatment over the past five decades. They also reflect on some of the ways that Ohio State’s cancer program has contributed, and on the future prospects of ending this disease.

‘It all starts with science’

Those words, once spoken to open an OSUCCC – James Annual Scientific Meeting, constitute an enduring theme for the cancer program, whose leaders often note that nearly all cancer treatments stem from clinical trials derived from basic science studies of the biology of cancer — a disease that fundamentally results from the body’s failure to regulate cell growth. To devise effective therapies, scientists must understand how cells normally work and how molecular defects can lead to malignancy.

“I think the overarching factor for improved cancer therapy has been the basic science advances we’ve seen in molecular genetics,” says David Schuller, MD, who served as director of the OSUCCC from 1988 to 1997, and as director and later CEO of The James from 1988 to 2008. “Having a better understanding of the changes that occur when a normal cell becomes cancerous has given us treatment opportunities that previously didn’t exist.

“It’s enabled us to have much more specific targets to try to diagnose at an earlier stage, whether it’s spiral CT (computed tomography) detecting lung cancer much earlier, or whether it’s all of the emerging blood tests under development that are going to transform diagnosis and even prevention,” Schuller adds.


Read what Ohio State's experts say about winning the war on cancer.

Pollock says some of the most critical basic science advances of the past half century include:

“The immunotherapeutic approach harnesses the body’s own immune defenses against cancer,” Pollock explained in 2019 when the OSUCCC – James opened the Pelotonia Institute for Immuno-Oncology under the leadership of Founding Director Zihai Li, MD, PhD. “We anticipate that all of these modalities ultimately will be combined in the majority of cases, working to complement each other’s strengths while downplaying the weaknesses and toxicities.”

An important factor in applying molecular genetics to cancer research has been the concurrent development of technologies that support and speed scientists’ ability to conduct research.

“Since 2010, new technologies have emerged to characterize the human genome — all of the 20,000 genes and 6 billion letters in humans,” says medical oncologist and researcher Sameek Roychowdhury, MD, PhD, referring to the 3 billion pairs of DNA bases in the genome, which are represented by letters.

“These technologies have enabled us to embark on an era of precision cancer medicine, or the use of genomics to identify genes in a tumor that can be targeted for therapy,” he adds. “Each person’s cancer is genetically unique, and if we can identify that ‘needle in a haystack,’ we can match patients to therapies for their cancer that are more likely to work.”

Alongside advances in molecular genetics and the advent of precision medicine are several other keys to improved cancer care that have come about in the past half century. Among these, Farrar lists:

A chronological and detailed review of important research highlights at the OSUCCC – James from 1971-2021 can be found in “Half a Century of Cancer Science at Ohio State.”

Read more stories from the 50 years of cancer series:

Your support fuels our vision to create a cancer-free world

Your support of cancer care and pioneering research at Ohio State can make a difference in the lives of today’s patients while supporting our work to improve treatment and reduce cases tomorrow.

Ways to Give
Bob Hecker is a senior staff writer at The Ohio State University Wexner Medical Center Department of Marketing and Strategic Communications.