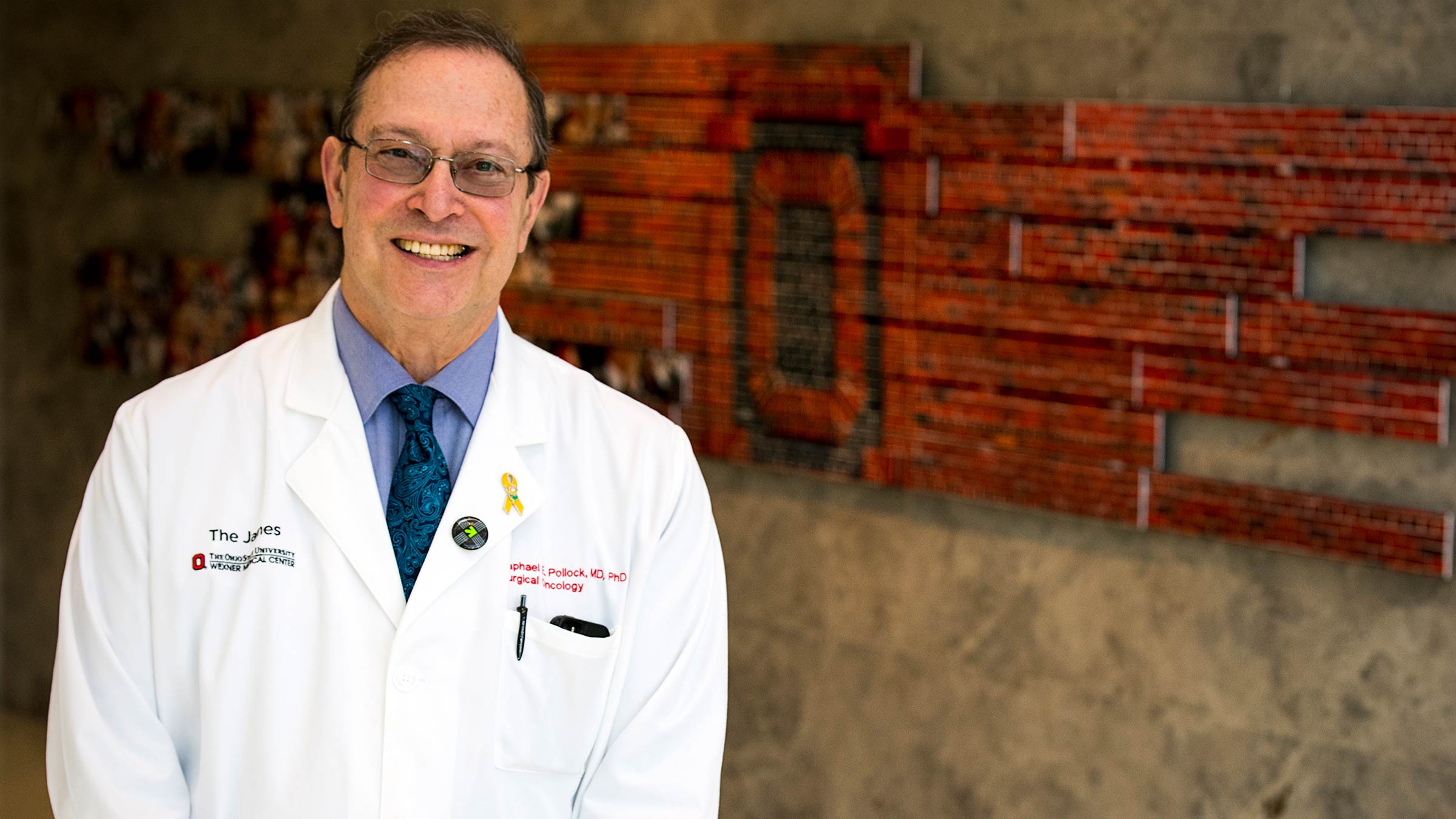 A few days before Christmas in 2016, he experienced severe stomach pain that he thought might be food poisoning from dining out. He felt weak and feverish, but an initial round of testing was inconclusive. His symptoms subsided and he kept up his demanding schedule as director of The Ohio State University Comprehensive Cancer Center – Arthur G. James Cancer Hospital and Richard J. Solove Research Institute (OSUCCC – James) and holder of the Klotz Chair in Cancer Research.

When the symptoms returned after the holidays, Pollock underwent radiology scans in January 2017 and learned that he had a large tumor in his spleen. He underwent emergency surgery to remove the enlarged spleen before it ruptured.

Follow-up laboratory analysis of the tumor showed that Pollock had CLL, the most common form of adult leukemia in the Western Hemisphere. The CLL had infiltrated his spleen and caused the tumor.

Pollock was enrolled in a clinical trial involving ibrutinib, a relatively new drug called a Bruton’s tyrosine inhibitor (BTK) that works by thwarting a protein that is essential for CLL to grow and spread. He later was switched to a second-generation BTK inhibitor called acalabrutinib, a more refined drug with fewer side effects.

Both breakthrough CLL therapies were developed largely through research by scientists and physicians at the OSUCCC – James.

Learn how Jennifer Woyach, MD, is solving the mysteries of CLL for leukemia patients

“I’ve learned what it’s like to live with a generally incurable but usually manageable malignancy, to participate in a clinical trial and to feel the side effects of cancer treatment,” says Pollock, who was recruited to Ohio State in 2013 after working for 31 years at MD Anderson Cancer Center in Houston.

“I still have active CLL, and I’ll need to take acalabrutinib for the rest of my life, but it is enabling me to carry on with my career in many capacities,” Pollock says.

“For that, my family and I are thankful to all of the researchers and caregivers at the OSUCCC – James, as well as to the community for generously supporting our research that contributed to developing the breakthrough CLL treatment that saved my life.”

Pollock says philanthropic donations power cancer research and lead to breakthroughs like the CLL treatment. He encouraged the public to continue to support Pelotonia, the annual grassroots cycling event that raises millions of dollars for cancer research at Ohio State.

He notes that an “Idea Grant” supported by Pelotonia funding contributed to studies of the BTK inhibitors, which “have revolutionized the treatment of CLL.”