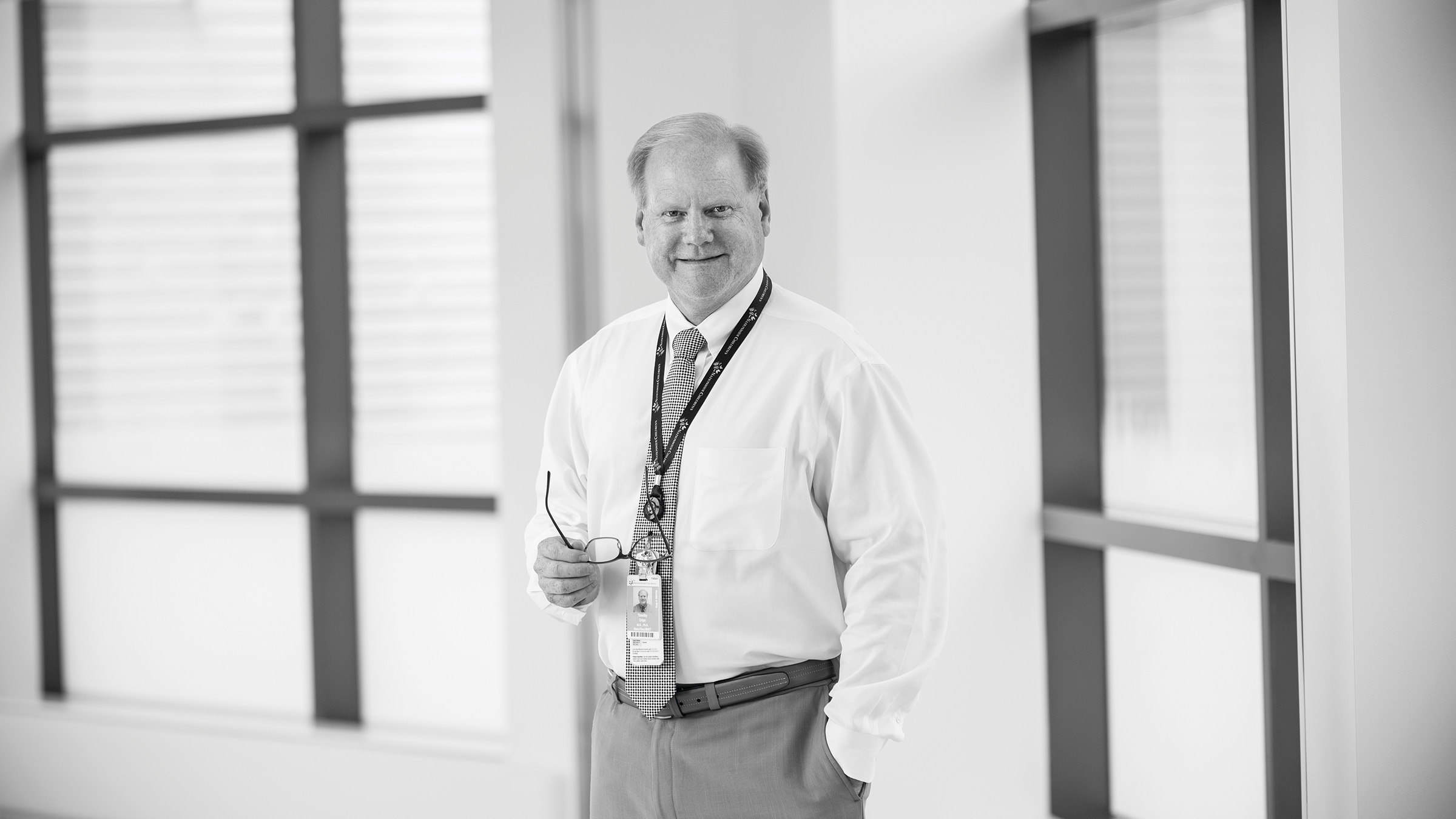 For Timothy Cripe, MD, PhD, the new proton therapy center at The Ohio State University will jibe perfectly with the two reasons he pursued a career in pediatric oncology.

One of those reasons is his love of caring for children with cancer. The other is his fascination with cancer biology and science-based therapeutic innovations that are rapidly improving treatment options for kids.

“Kids are a lot of fun,” says Cripe, chief of the Division of Hematology and Oncology at Nationwide Children’s Hospital and a professor in the Department of Pediatrics in the Ohio State College of Medicine. “As a pediatric medical resident, I had some fear before rotating through oncology that it would be depressing, and of course there are a lot of sad things that happen, but taking care of kids with cancer turns out to be both an honor and a joy. It’s an honor to be involved in their journey and to help guide them, but it’s also a joy to see how resilient they are, how they’re able to handle devastating situations with such grace.”

Working in a new era of cancer treatment

As for the science, he adds, “The advances in knowledge have been so rapid that it’s very intellectually stimulating. Having a chance to do research in this era and to develop new therapies that will help kids in the future is an exciting thing for me.”

The proton therapy center that’s slated to open in 2023 as a partnership between Nationwide Children’s Hospital and The Ohio State University Comprehensive Cancer Center – Arthur G. James Cancer Hospital and Richard J. Solove Research Institute (OSUCCC – James) is a case in point. The first of its kind in central Ohio, the center will enable both children and adult patients to receive the very latest radiotherapy in one facility that is closer to home, making it a less disruptive life experience.

Proton therapy uses protons, or positively charged particles found within atoms, instead of X-rays to kill cancer cells. Because it more precisely targets tumor cells, it limits radiation exposure and potential damage to surrounding tissue and organs, reducing the chance of short- and long-term side effects. This is especially important for pediatric patients, whose bodies are still developing.

“If we radiate someone who’s still growing and a bone gets exposed to it, for example, then that bone may stop growing and the patient could have a shorter leg on one side, or perhaps (if the spine is radiated) the patient could be tilted because one side of the spine’s growing and not the other side,” Cripe explains. “Pediatric patients also could experience growth hormone effects on the pituitary gland, or endocrinological problems, or they could face impaired brain development and cognition.”

An even newer and more highly targeted form of proton therapy that planners believe will eventually be available at the center is called FLASH. Although FLASH is not yet approved by the U.S. Food and Drug Administration, data from preclinical models have shown that this therapy could reduce a typical weeks-long treatment regimen to a single treatment delivered in less than a second.

“FLASH could be a huge game-changer,” says Cripe, who is also in the Translational Therapeutics Program at the OSUCCC – James. “It’s a sort of a once-in-a-lifetime technological advance that has the potential to markedly and in a quantum-leap fashion change the way we care for our patients.”

Within the new center, Cripe says, Nationwide Children’s Hospital researchers will be able to establish clinical trials that focus on how proton therapy affects specific types of pediatric cancer while also examining quality-improvement best practices for administration and safety.

“We’ll partner with Dr. (Arnab) Chakravarti and his team at Ohio State to study various aspects of proton therapy in our pediatric patient population. Our quality-improvement studies will center on how to make it as efficient and comfortable as possible for our patients,” Cripe says. “From a pure research standpoint, we need to remember that proton therapy is still relatively new, and reports are coming out every day about its utility in different kinds of cancer.

“But there’s plenty of room for more research to figure out how well it’s working, whether it’s working as well as or better than conventional radiation therapy, and whether it’s reducing long-term side effects,” he adds. “That’s certainly the expectation and the hope, but we want to make sure we capture those data and study that.”

Cripe says FLASH will be a big focus of studies at the center. “This very new technology is exciting because the total energy can be delivered in a microsecond as opposed to being spread out over six weeks. There are some animal data that suggest it might work better because you’re delivering that energy more quickly. And since it’s a much shorter time period, we need to see that it works as well as the usual six weeks of therapy. Before implementing FLASH as a standard of care for our pediatric patients, we’ll need to study it and make sure it’s doing what we hope it will do.”

A safer approach for pediatric patients

Despite the need for continued studies, strong evidence suggests that proton therapy can be used to effectively treat many types of localized cancer (or cancer that hasn’t spread) in children with brain cancer, lymphoma, retinoblastoma and sarcoma — and in a much safer manner. The American Society of Clinical Oncology reports proton therapy may deliver up to 60% less radiation to healthy surrounding tissue and a higher dose to the tumor itself.

Another reason proton therapy is useful in pediatrics, Cripe says, “is simply time. Most adults who are getting radiation are older and therefore might have an expected life span, even if cured, of only 10, 20 or 30 years, not 70 years as many children will have. So we’re not going to see the late side effects of cancer treatment in most adults who get radiated, but we will see those effects if we cure young patients of their cancer and they go on to live 70 years.

“I think one of the most compelling reasons proton therapy is important for pediatric patients is that they’re at more risk over time for long-term effects. This more targeted therapy could minimize those.”

He notes that Nationwide Children’s Hospital historically has sent all its patients with cancer who need radiation therapy to The James for that treatment; partnering with the university in a proton therapy center is a logical next step.

“Ohio State’s talked about doing this for a long time, and it’s had various iterations over the last 15 years or so,” Cripe says, pointing out that there was an important need for a partner such as Nationwide Children’s Hospital in this endeavor. “The main utility of proton therapy is in pediatrics, so the venture really needed to involve us and them in a partnership. We’re gratified that we were all able to pull it off.”

Especially for the children, he says, adding that beneficial innovations such as proton and FLASH therapy fuel his motivation for continuing his decades-long career. “Advancements like these make me believe that we can do even better in the future than we’re doing today.”